Building permits were higher in most regional districts except in Alberni-Clayoquot and the Comox Valley. Large gains over the prior quarter occurred in the Nanaimo and Strathcona Regional districts.

This Month Enjoy Buy More, Save More Specials at Budget Blinds of the North Island 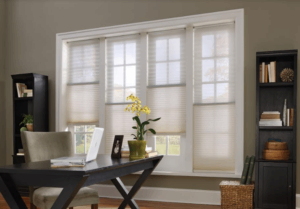 Spring is a great time to freshen up your home’s window coverings, and this month, buy more and save more with Budget Blinds of Central and Northern Vancouver Island. Enjoy 30-40% off selected styles this May – the more you buy, the more you’ll save.

Budget Blinds designers can provide a free in-home consultation to guide you through the latest choices and ensure you receive window treatments that suit your decor, lifestyle and your family’s needs.

According to the Vancouver Island Real Estate Board’s (VIREB) September statistics, sales of single-family homes in their region, which covers from Duncan to Port Hardy, decreased by 32 per cent compared to September 2017 with Nanaimo down 36%, followed in order by Parksville, Campbell River, the Cowichan Valley, Port Alberni, and the Comox Valley at 21%.

Home Sales Are Down, But Prices Are Up on Vancouver Island

Housing demand has decreased in the Vancouver Island Real Estate Board (VIREB) area, which ranges from Duncan to Port Hardy, in the first half of 2018. Despite lower sales to date, lack of inventory continues to tilt the market in favour of sellers and move prices up.

More and more seniors are seeking a place to transition to, and there are several projects under way to meet the high demand on Vancouver Island.
There is a total of 345 new seniors’ units that will be built within the next 24 – 36 months in the North Vancouver Island region.

■ ■ ■
In Courtenay, a public hearing for the proposed seniors housing complex on five properties located near the intersection of
Cliffe Avenue and 29th Street was held in August. Each of the properties fronts onto Cliffe Avenue and has views of the Courtenay Riverway and the ocean. The applicants are proposing to rezone two properties and to add a care facility and complementary uses as a permitted uses in the R-4A zone. The proposed seniors housing complex is comprised of approximately 78 independent living units in a four-storey building, and a 76-bed assisted care facility a two-storey building.

■ ■ ■
Also in Courtenay, Phases 1 and 2 of a renovation project for the Westerly Hotel is underway to move forward to convert existing hotel suites into 48 seniors’ residences for Phase 1. Further enhancements in Phase II will include the addition of amenities, such as a new dining room and media room.
The decommissioning of hotel units is underway now and the renovation of the independent studio and one bedroom units are expected to be completed in Feb. of 2018. Phase 3 is in the planning stages and will include an additional 48 units in a four-storey building located alongside the river. Upon completion of this project, which is expected to take 24 months, the hotel will continue to operate alongside the seniors’ residences.

■ ■ ■
Port Alberni – Following a public hearing, city council has taken another step in the proposed development to Westporte Park, a seniors development. The proposed development includes 20 units of one-bedroom housing, which will accommodate either couples or single seniors. If approved, construction is planned to begin in the fall of 2017.

■ ■ ■
Powell River – The Committee of the Whole has recommended the approval of a development permit for a seniors’ housing project known as Coastal Winds and a Zoning Bylaw Amendment received first and second reading in April. Inclusion Powell River and Golden Life Management are proposing to build a 75-unit seniors’ housing complex next to Powell River General Hospital. The intention is to build the project on a 3.5-acre parcel located on Joyce Avenue. The rezoning application requested a change from R-1 to Comprehensive Development Zone, paving the way for a mixed-use facility that could include businesses on the main level and living units on the upper levels. Once all approvals are in place, this project is expected to begin construction.

NANAIMO, BC –  Sales activity across the Vancouver Island housing market area finished on a high note in December, capping off the strongest year since 2009. After a sluggish market in 2012, sales began to pick up some steam in the second half of 2013, resulting in a stronger finish to the year than the Board anticipated a few months ago.

The Vancouver Island Real Estate Board (VIREB) reports a total of 3,941 single-family homes sold in VIREB coverage area on the Multiple Listing Service® (MLS®) in 2013. This signifies a ten per cent increase over the 3,582 sales recorded in 2012. Average sale price remained relatively flat for the year, decreasing by one per cent.